Its 1st September and I’m not entirely sure where August went. I have spectacularly failed to review the books I’ve been reading so instead  I’m going to  summarise what I’ve read instead.

So I have been reading a variety of things and really want to recommend them all.

Firstly I read Lucy Hounsom’s Heartland which is the middle book in the world maker trilogy.

This is the second part of Kyndra’s story and I loved how it unfolded. It felt different to a lot of trilogies in that Kyndra wasn’t all that pleased to be Starborn. The powers that she has come into are terrifying for her and this novel is more about coming to terms with that.

The characters that I loved in Starborn are still there. Nediah and Breganne, Gareth.  This instalment took us places I didn’t expect and was the better because of it.  I really found it a satisfying read and I am glad I already have the final part of the trilogy Firestorm all ready to go. 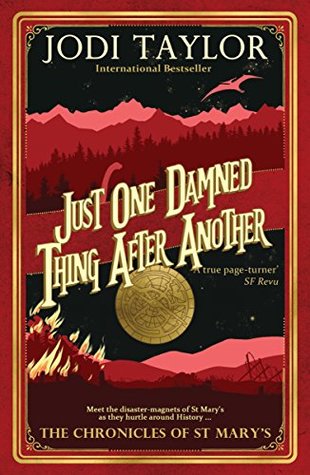 The second book I have read recently is about as far away as you can get from Hounsom’s epic fantasy.  Just One Damned Thing After Another were recommended to me recently I have been really glad that this series has been as it is tremendous fun.

The first in a series of I think eight or nine novels and MANY short stories this is a time travel romp with lots of shenanigans and several secrets in the telling.

Its not without its flaws and the tone felt somewhat inconsistent  the pacing was all over the place and it really would have benefitted from a good editor.  It reads like fanfic and I say that with a lot of love. I will definitely read more but I want there to be a tighter narrative to make things work a bit better for me.