Nine Worlds aka London Geekfest happened and this post isn’t going to be a blow by blow account of what I did but a series of moments that happened because it was too packed for much else.

Where to start, the wondrousness that was Cheese and Cheese.  This was run by Ruth aka @AlchemistDreams .  This involved eating cheese whilst listening to volunteers read cheesy excerpts from films and novels.  It turned into the silliest thing ever and there was much laughter and warmth. 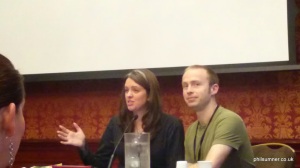 Friday involved geeky poetry writing with a workshop run by @dansimpsonpoet this was a lot of fun and probably the smallest event I went to.  It was useful because I’ve been struggling to write anything of late and I was able to scribble some bits and pieces which didn’t suck.  I am going to work on my poem about the sheer joy of geeking.  I need to explore more poetry.

I went to geek feminism 101 which was a lovely panel, I got to refresh myself with terms learnt about Geeksplaining and met @ferdinandpage who is great.

Friday evening consisted of catching most of the Mechanisms gig and flailing to Rhapsody, who put on the most amazing show.  The Mechanisms are a group of steam punk space pirates and they are well worth catching if you get the chance.

The Mechanisms – High Noon Over Camelot

My most surreal moment happened whilst taking tea an chatting with Emma Newman the author of the brilliant Split Worlds Trilogy and presenter of the Tea and Jeopardy podcast. We were joined by Anne Lyle who was rocking an assassin cosplay and then later by Paul Cornell and Adrian Tchaikovsky. Emma had to leave and I was left sitting with all these amazing people and I bottled it and ran away. Next time I will be braver and speak more.

Kudos has to go to the Steampunk track for the Gin Tasting where not only were some epic gins tasted. But we also got a history lesson as well trying some weird and wonderful Gins like Brussel Sprout gin which I can only describe as not being as bad as it sounds.

I dipped into the promnado which was slightly intimidating but met some wonderfully lovely people from the twitters.

Final mention has to go to Laurie Penny’s feminism panel which was a little dip into her world view.

To be fair which panels I attended or didn’t or what events are already starting to blur so I’ll leave you with a mismatch of images from the weekend.

Were there any bad points?  Well the prices at the bar were astronomical.  The bijou bar had no idea how to make a decent cup of tea. I needed a time turner to get to everything and I know I missed out on a lot.

Will I be back next year?

All pictures by my partner in crime @pmsumner

2 thoughts on “Nine worlds aka a very surreal weekend”